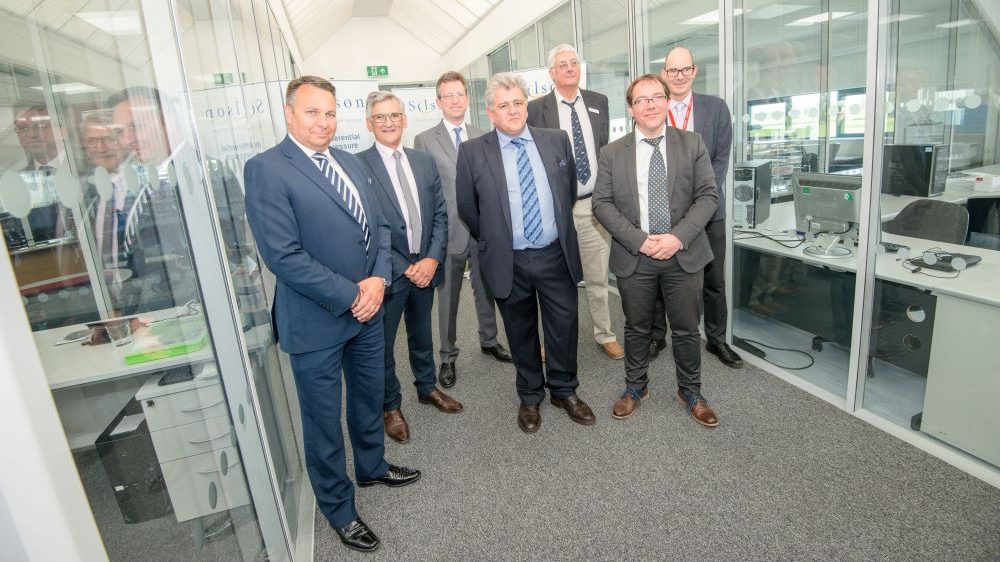 A high-tech company that sells its cutting edge products across the globe has been hailed by an MP as a shining example of how regional support can help a business of any size to achieve its ambitions.

Southam-based Silson, which makes ultra-thin membranes for use in science around the world, has just celebrated its 25th anniversary with the unveiling of the latest phase of its development.

The company was set up by Peter Anastasi in 1994 as a virtual business before moving into its own premises in Northamptonshire three years later.

After years of research and development, Silson wanted to expand and was attracted into Warwickshire in 2015 when it created its own headquarters at Insight Park in Southam.

Funding for this project is the result of a successful grant application to the European Agricultural Fund for Rural Development (EAFRD) under the CWLEP Business Development priority.

This funding, managed by the Rural Payments Agency, part financed the development of the first floor of the company’s headquarters into office space and further laboratories.

The company, which now exports its products to more than 700 institutions in 45 countries around the globe, invited Kenilworth and Southam MP Jeremy Wright, to unveil the latest phase of its development.

Mr Wright said: “‘Congratulations to Silson on its expansion in Warwickshire.

“This company is a good example of what we hope to see in the UK specialist manufacturing industry – innovative processes, co-operation with our world class local universities and good engagement with local government and the Local Enterprise Partnership.”

Peter said the company had also been supported by Lloyds Bank and Coventry University Enterprises in its growth ambitions and that the joined up approach in the region had proved invaluable to the firm.

He said: “I believe we are a genuinely good news story for Warwickshire. We took the decision to move here and have been supported enthusiastically by a range of local bodies and partners.

“We are still classed as a micro manufacturer but we are growing and have a global footprint, selling these tiny, high-tech products into 45 countries all around the world.”

Craig Humphrey, managing director of the CWLEP Growth Hub, said: “We are very pleased to have supported Silson and they are a shining example of how this region works together for the good of the local economy.”

Dirk Schafer, business growth adviser at the University of Warwick Science Park, said: “Silson are a great business to work with. They want to engage and access support that is available where it can speed up their growth and we are delighted to have helped them over several years now.”

Cllr Izzi Seccombe, portfolio holder for economic development with Warwickshire County Council, said:  “The county council works hard alongside its partners to help small businesses set up and gain access to finance and this is a fantastic example of what can happen with timely support. Enterprises such as this are key to the county’s economy so we are thrilled to see their expansion.”